Sicily DMC Incentives: Easter in Sicily /Sicily is famous for its spectacular celebrations surrounding Pasqua (Easter) as Sicilians head to church and take to the streets in parades to honour the most important week in the Christian calendar. Festivities continue throughout Holy Week, culminating on Easter Sunday, when families enjoy a lunch based on roast lamb and specially-prepared cakes.  Sicily DMC Incentives: Easter in Sicily

Pasquetta (Easter Monday) is traditionally the first chance for a spring outing in the year, when Sicilians head for parks, beaches and nature reserves to have a picnic. All over the island, in large towns and tiny villages alike, processions weave their way through narrow streets, central thoroughfares and piazzas until finally they arrive at the local parish church or Cathedral. 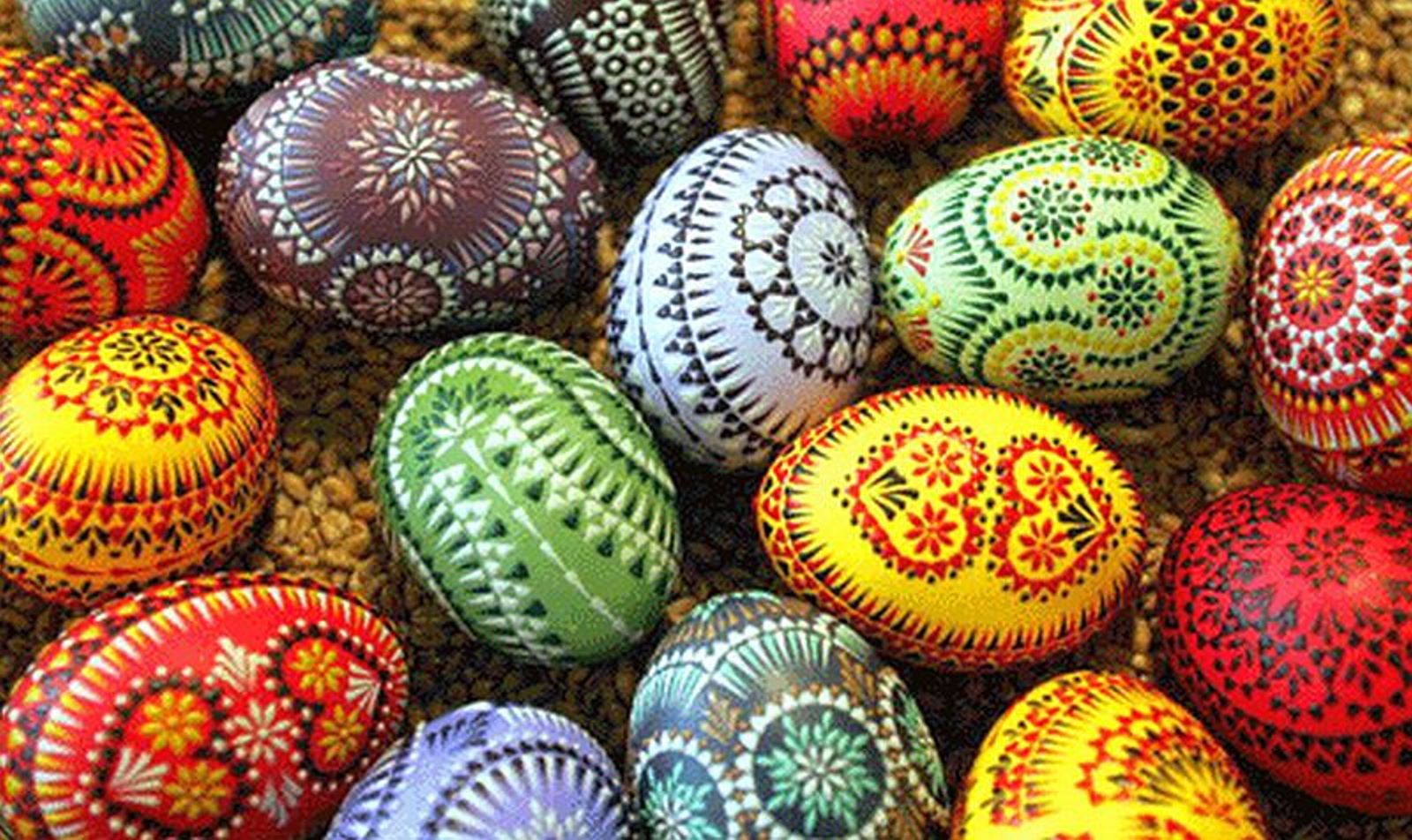 Sicily DMC Incentives: Easter in Sicily /Easter also signals the arrival of Spring, and many pagan traditions that used to mark the arrival of the “beautiful season” have been incorporated into the religious festivities.

For food lovers, Easter is a great time to come to Sicily: enticing seasonal delicacies and gastronomic delights celebrate the bounty of Primavera. It is the time for Martorana, or Pasta Reale, marzipan confectionary that is delighfully shaped and painted to resemble fruit of all types. 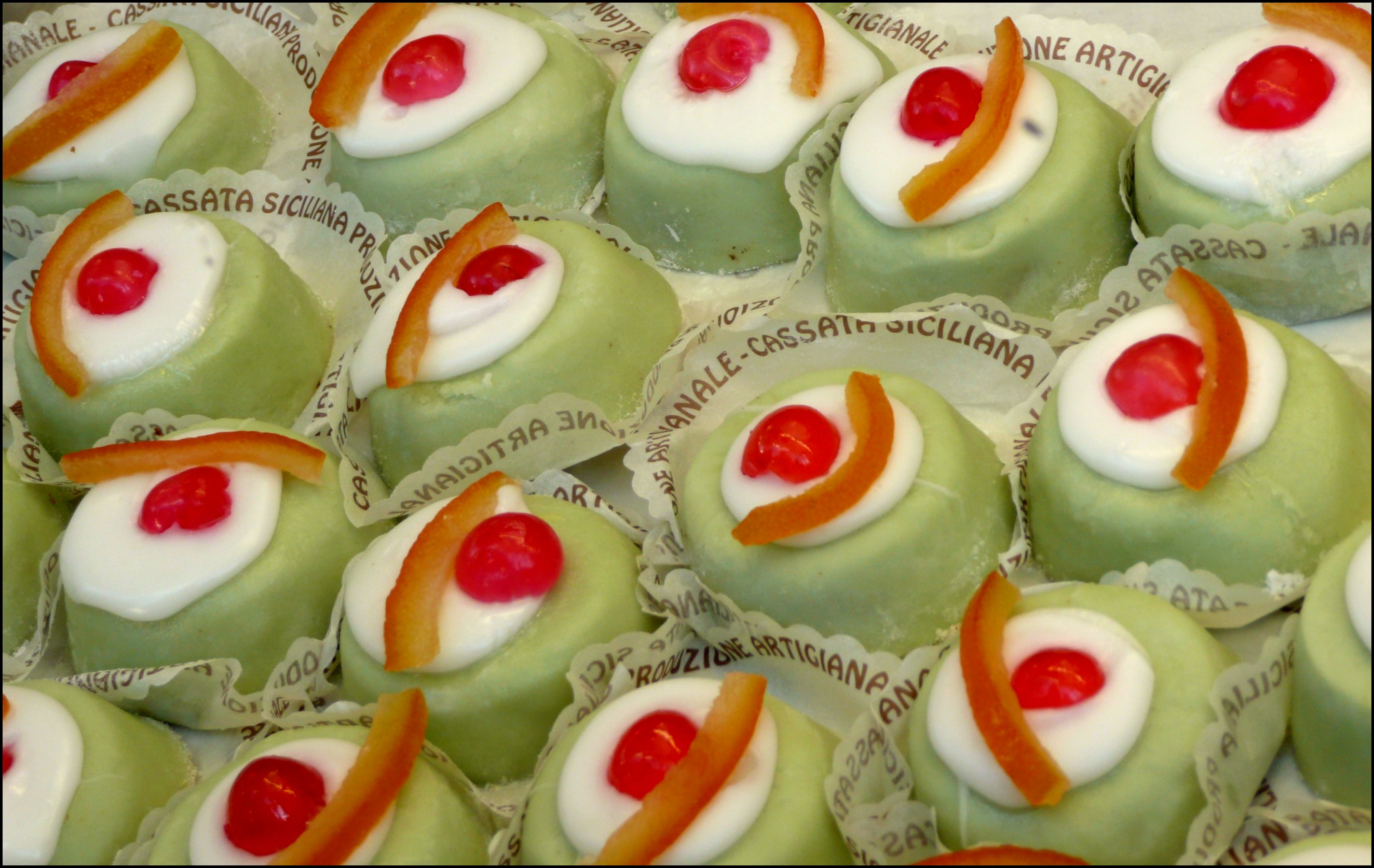 Returning to the more sacred aspects of ‘Pasqua’, however, here are a few interesting events to experience if you’re visiting Sicily at Easter and want to taste the atmosphere of age-old traditions: 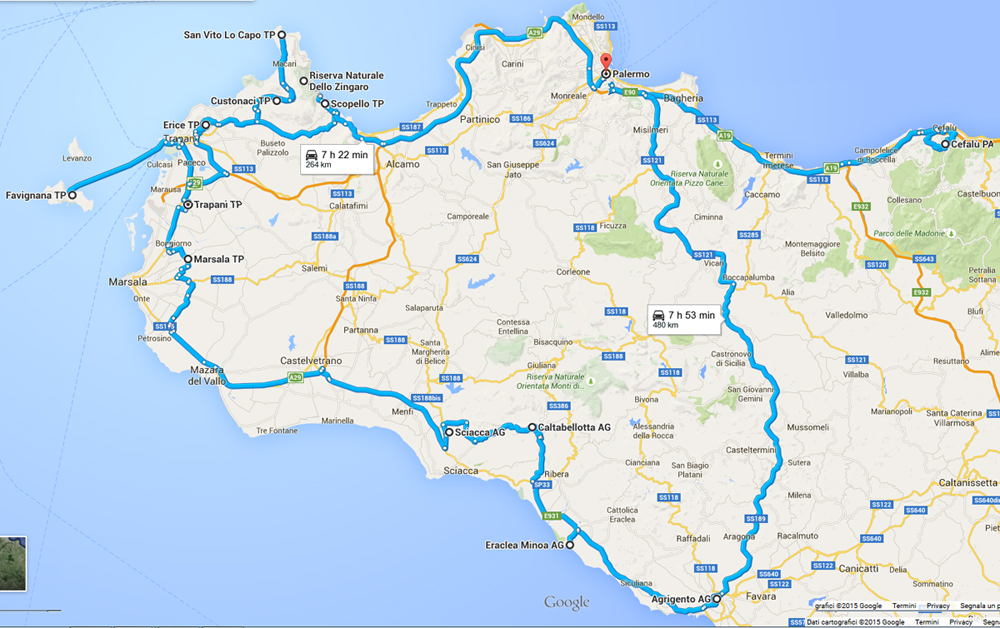 Probably the most renowned religious manifestations of devotion in Sicily are the “Mysteries” of Trapani on Good Friday, in which the townsmen carry statues through the streets. Each statue represents one of the stations of the cross and are all made by the various local guilds.

Thousands of Sicilians line the streets awaiting the arrival of the Virgin Mary “in search” of her son. A similar procession takes place in Caltanisetta on Maundy Thursday.

Erice and Busetto Palazzolo both have evocative processions on Good Friday. At Erice, the celebrations are similar to those at Trapani, with statues being carried through the town, while at Busetto, there is a wonderful costumed recreation of the Stations of the Cross.

Palermo and around In Partanna-Mondello, a suburb of Palermo, the Easter week is celebrated with costumed and scripted recreations of Christ’s arrival at Jerusalem (5.00pm on Palm Sunday), the Last Supper (9.00pm on Maundy Thursday) and the Stations of the Cross (11.00am on the Saturday before Easter Sunday). Thousands of locals attend these events and the atmosphere is one of great devotion. 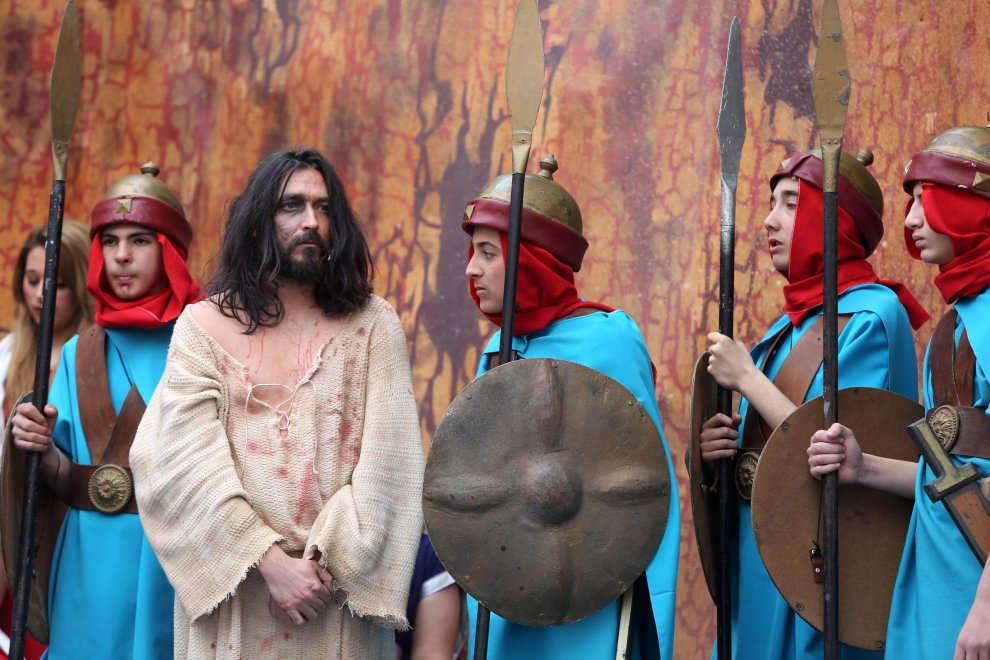 Being somewhat isolated, the town has managed to maintain much of its original identity and many of its traditions, one of which is its Orthodox Easter celebrations (it has been a Greek Orthodox Bishopric since 1937). On Palm Sunday, there is a procession through the streets to mark Jesus’ arrival in Jerusalem.

Festivities continue all week until Easter Sunday when the townsfolk put on their traditional 15th Century costumes and hand out previously blessed red hand-painted eggs. After Mass there is the procession of the Holy Veil, a piece of cloth in which believers can make out the face of Christ. 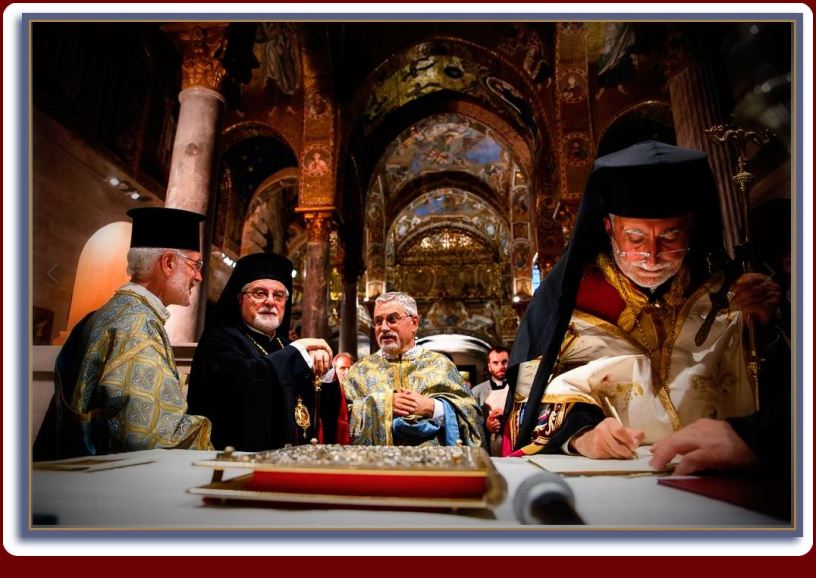 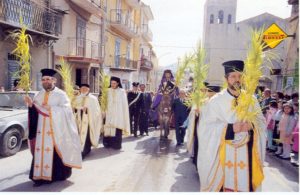 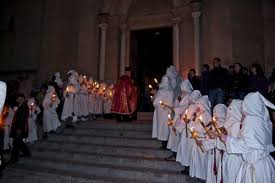 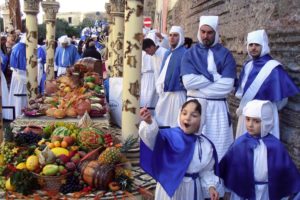 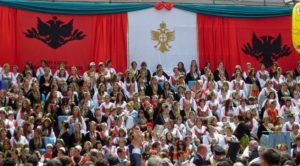 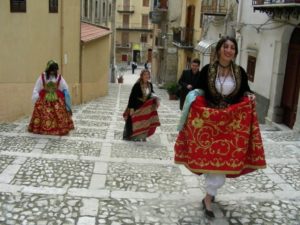 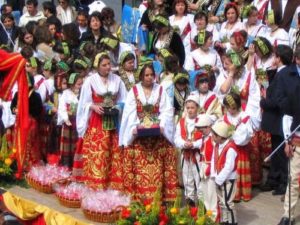 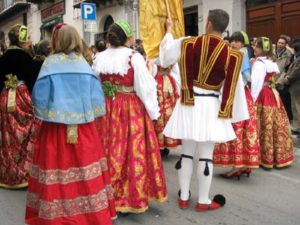 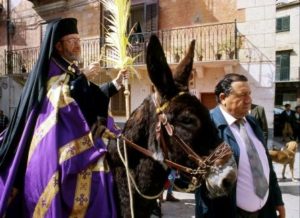 Another option is a trip to San Martino delle Scale, a small village hidden away in the mountains just behind Palermo. Here, on Easter Monday, the monks of the Benedictine Monastery celebrate Easter and the coming of Spring by freeing the birds they have saved from the harsh mountain winter.

The birds are kept in a large specially built aviary and their release is part of a tradition that goes back over 300 years. The arrival of Spring is also celebrated with concerts, enormous floral arrangements and Gregorian chant, all of which create a wonderful festive atmosphere. 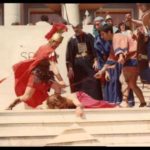 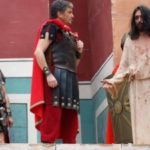 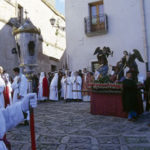 On Palm Sunday, Caccamo, a mountain town east of Palermo hosts a marathon procession called “U Signuruzzu a Cavaddu”. At 9.00am the bells of the many churches signal the commencement of proceedings and an altar boy, riding a donkey, is accompanied through the streets by the local band and 12 children dressed in red tunics, holding palm fronds. For three hours, the troupe tours the town’s churches, receiving, at each one, a tumultuous welcome. 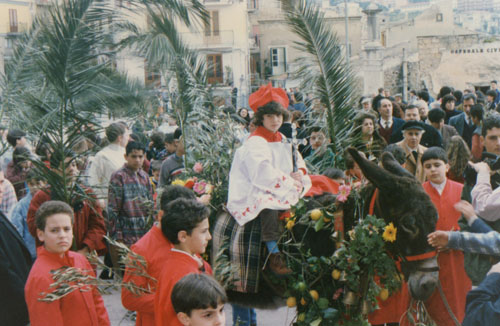 Meanwhile in Prizzi, in the hills south of Palermo, a very different event takes place on Easter Sunday – The Dance of the Devils. Wearing red and black satanic masks complete with horns and grotesque noses, a portion of the townsfolk wreak havoc, constraining passers-by to buy them drinks (a metaphor for stealing their souls).

In the struggle that ensues between good and evil, it is Christ and the Madonna who triumph, along with other locals dressed as angels. During the ensuing celebrations the devils are “forced” to get the drinks in and “cannateddi”, a typical Easter cake, is distributed. 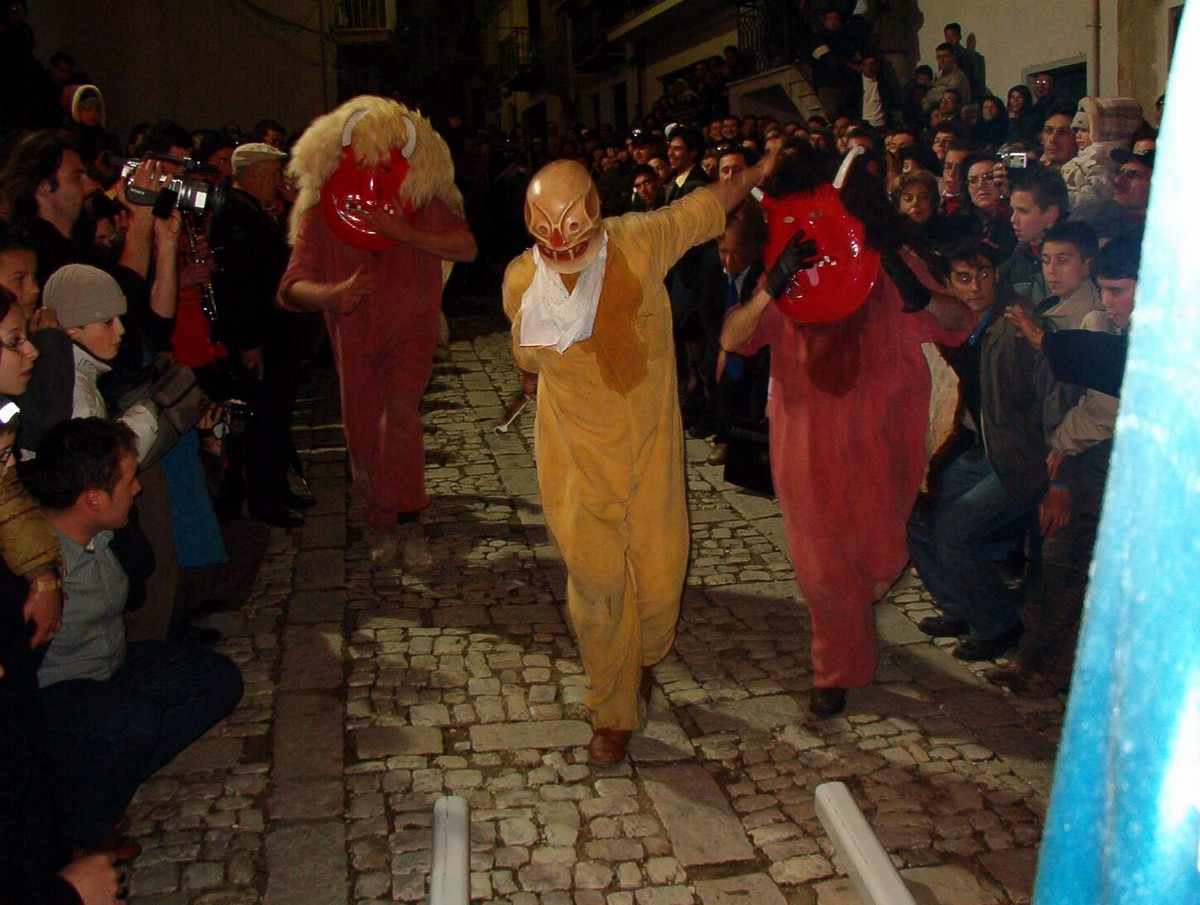 In Gangi, in the Madonie Mountains, the most important day of the Easter calendar is Palm Sunday, which sees a procession through the streets, with drummers, and members of the various religious confraternities dressed in white tunics and coloured cloaks, carrying specially created arrangements of palm fronds and flowers. Mass in the Chiesa Madre is signalled by the drum voluntary. 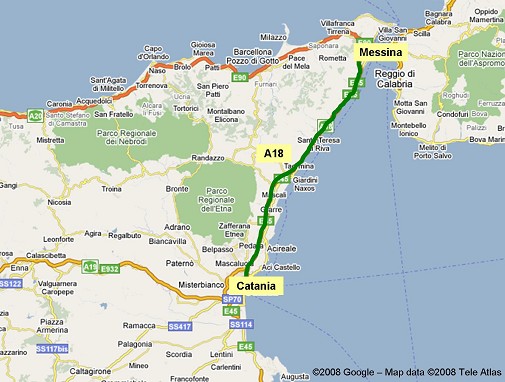 On Easter Sunday in Adrano, on the south-west flanks of Mount Etna, the triumph of good over evil – as in Prizzi – is celebrated with the “Diavolata”. In the central piazza a stage is erected and divided into two parts: one devoted to Hell, inhabited by the Devil and five demons, and the other to Heaven.

The Diavolata is, in effect, a play in which an angel battles against the Devil, trying to make him and his demons say the words “Viva Maria”. The costumes are colourful and there are even some stage effects, such as smoke and fire. The outcome of the struggle, seeing that it takes place on Easter Day, leaves noone surprised.

At Bronte, on the western flanks of Mount Etna, Good Friday and the Passion of Christ is celebrated with a heartfelt, highly-charged costumed procession, re-enacting the Stations of the Cross. Silence is expected from observers, and only the beating of drums can be heard… A similar event takes place in Caltagirone. 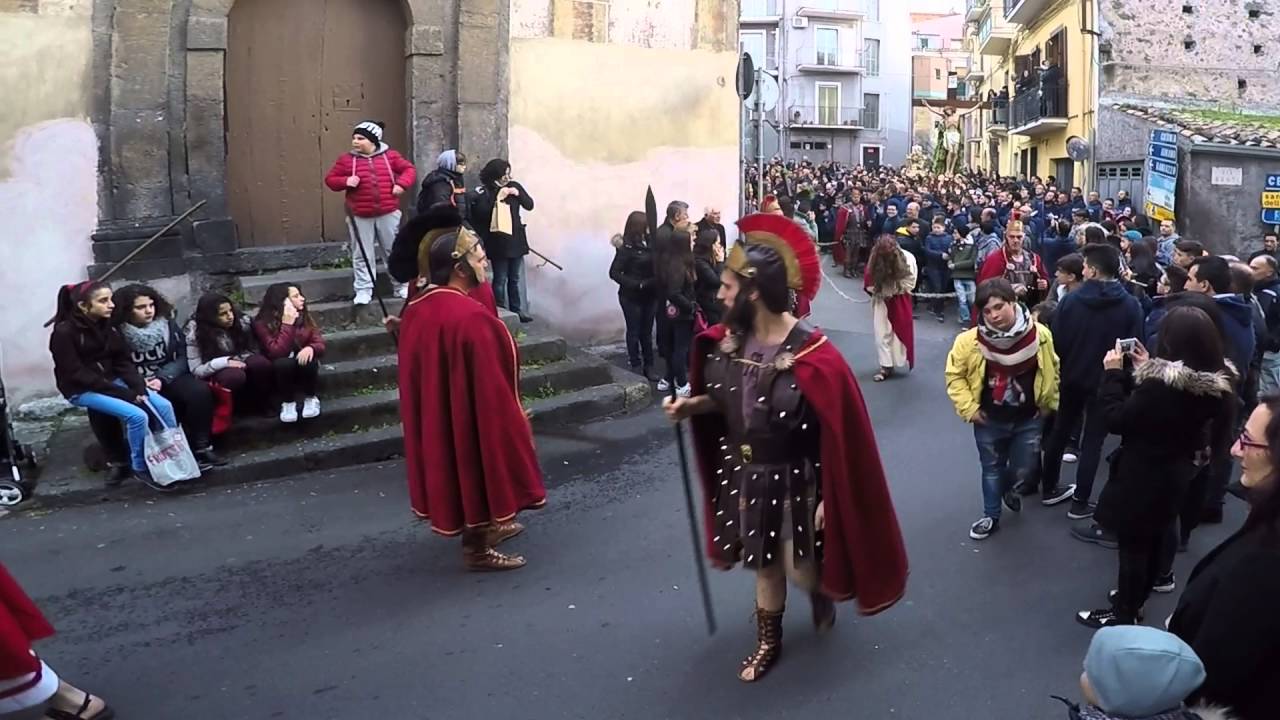 At Forza d’Agro’, just north of Taormina, on Easter Monday, the locals continue an age-old tradition, including a procession of holy oils, laurels, the distribution of home-made bread called ‘cuddure’ and a small competition to choose the best religious banner made out of laurel leaves. 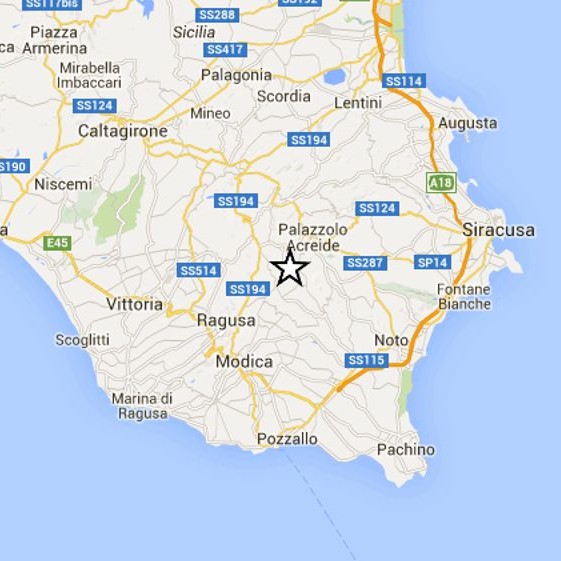 Easter Sunday in Modica is characterised by the solemn procession of the “Madonna Vasa Vasa”. A statue of the Virgin Mary is carried around the town before arriving at Piazza San Domenico where she encounters a statue of Jesus and kisses him. 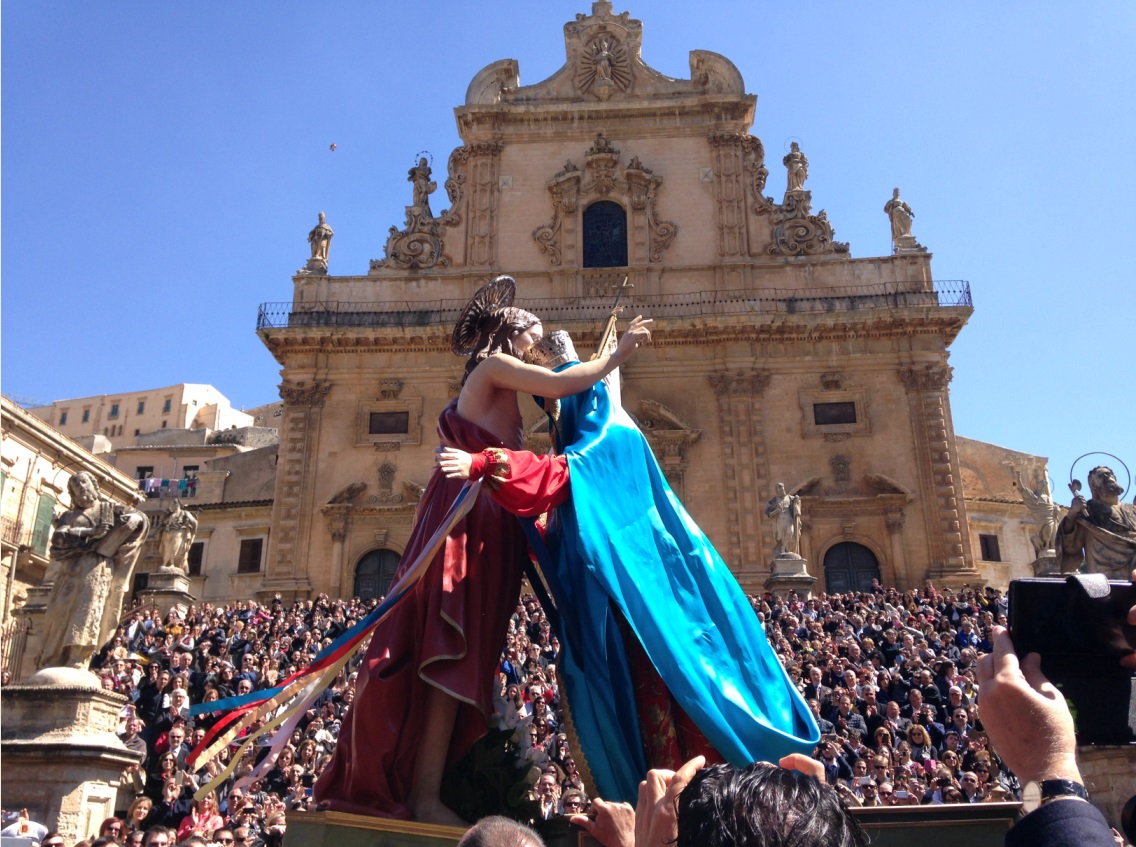 Just up the road in Noto, the week of Easter is celebrated with a series of processions including one in the afternoon of Good Friday and another in the morning of Easter Day. Similar events also take place in Ragusa Ibla.

At Scicli, on Palm Sunday an ancient statue of the Madonna della Pieta’ – discovered in around 1,000AD, after being hidden from the Saracens for several hundred years – is transferred from the Church of Santa Maria La Nova to the Church of Carmine. 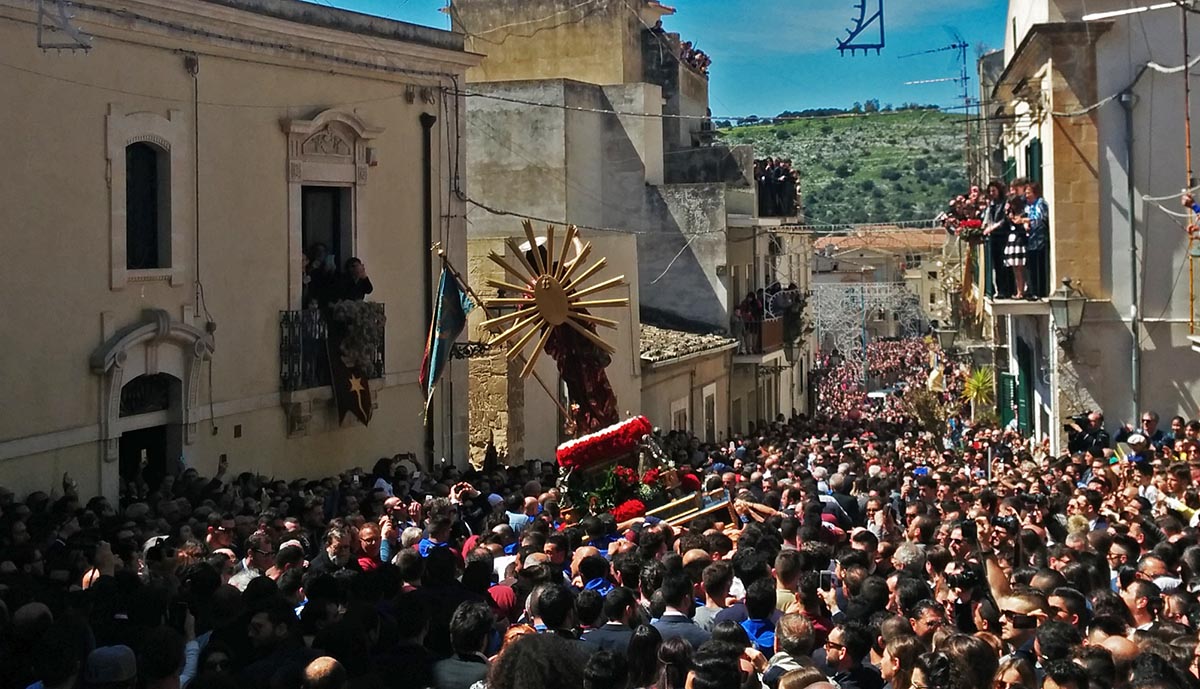 If you’re staying in the south-east, you could also pop along to Ferla, near Syracuse, on Holy Saturday. Here at 9.00pm the town’s church bells signal the beginning of celebration starting with a fireworks display. Church’s are illuminated, the town band plays and a procession begins. Some hardy souls continue all through the night carrying Christ’s body round the town in a torch-lit vigil. 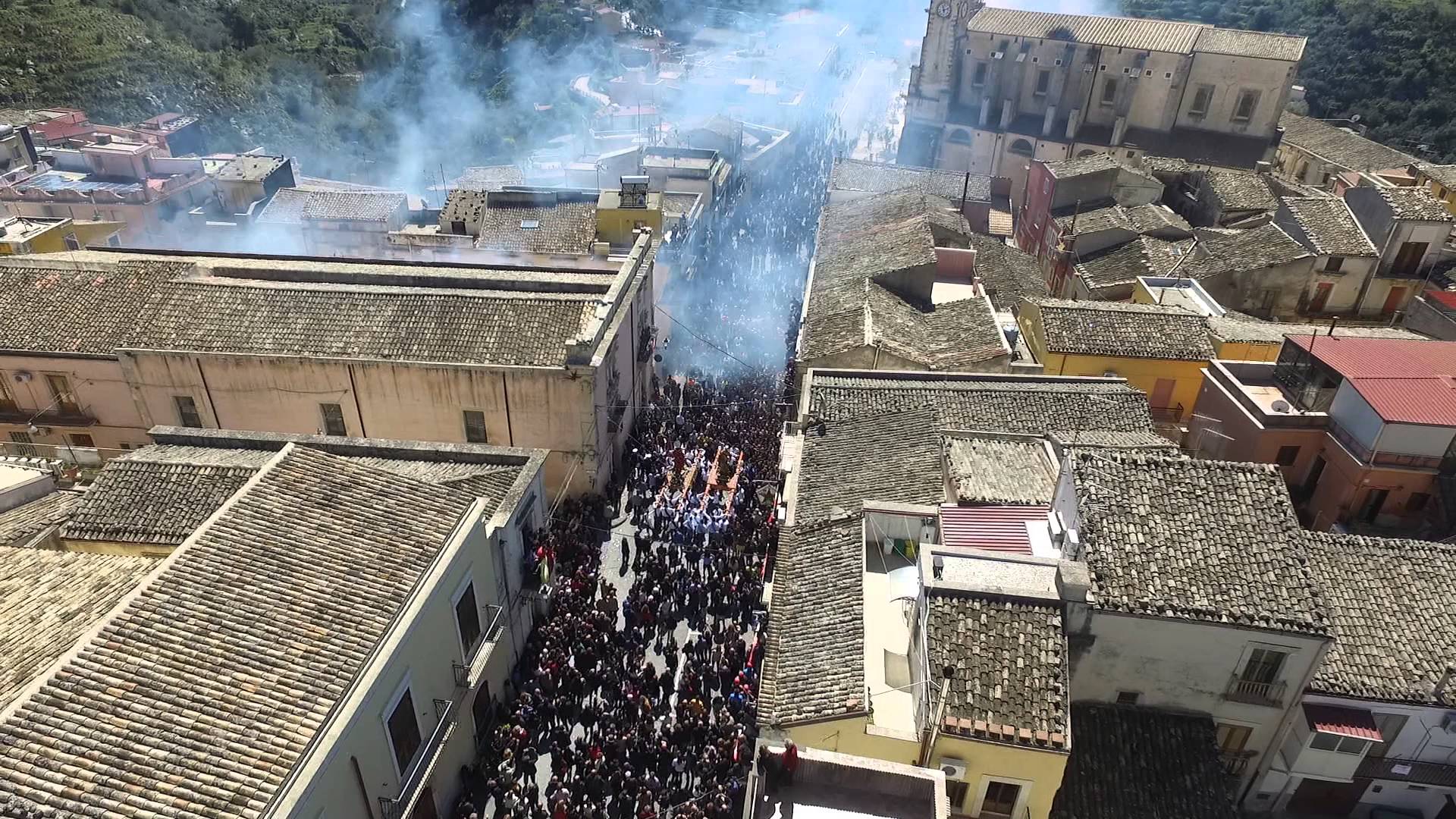 In San Biagio Platani (in the province of Agrigento) on Easter Sunday. Two religious factions deck the town in colourful decorative arches made from all sorts of materials including vegetables and cereals.

Each group’s work is prepared in absolute secrecy during the weeks leading up to Easter and each attempts to outdo the other. The competitive spirit is, however, just a backdrop to the more important celebration of the resurrection of Christ.